Every year again in Stuttgart, everything revolves around quality assurance. Once again, the visitors flocked to the PLATO booth for 4 days. This showed itself in a new garment: The rear walls developed during the trade fair into a piece of artwork – painted by our graphic recorder Till Lassmann, who partly implemented the ideas of the visitors. By that, the stand concept underscored the agile approach of the PLATO e1ns engineering framework.

Further, the latest news from the PLATO product world attracted much attention. Numerous national as well as international visitors took the opportunity to enter into dialogue with the PLATO team and get the latest information about the advantages of the web-based software.

In addition to PLATO e1ns, the document management tool XERI™ received a lot of encouragement. Many visitors were enthusiastic about the ease with which the documentation of management systems was implemented according to different standards, such as DIN EN ISO 9001: 2015, IATF 16949, KTQ, GMP.

A heartfelt thanks to the numerous trade fair visitors for the interesting discussions. We look forward to seeing you again at the Control 2018 and / or at one of our upcoming events. 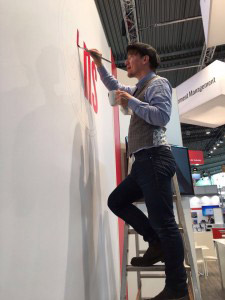