plato-e1ns.com » About PLATO » News » Dust-Free Solar Panels in Senegal Thanks to PLATO e1ns

A successful project of HAW Hamburg within the PLATO University Program.

It has been about two years since the Hamburg University of Applied Sciences (HAW) joined the PLATO University Program. Right at the beginning of the cooperation, the PLATO software e1ns was intended for a project in cooperation with the University of Engineering in Dakar, École Supérieure Polytechnique (ESP). The development of a cleaning robot for solar panels shall advance the solar technology of the African state Senegal.

Senegal is located in the sunbelt of the Sahara and is in the middle of the energy transition. The economically emerging state relies on a good dozen solar parks with more than 700,000 panels as an ideal application area for the conversion of solar power. The universities ESP and HAW support the startup company Conceptech in the development of a cleaning robot for solar panels.

The focus of the project is the solar park Diamniado in Dakar, where almost 7,000 panels have to be cleaned regularly every week. Due to their inclination angles and large surfaces, these are significantly affected by weather, sand and dust. The cleaning is currently done manually by hand: The self-made cleaning aid is the invention of one of the workers at the solar park. The aid consists of sticks, cloth and several ropes that have been knotted together (see picture) - with side effects for people and panels. The physical strain on the workers at around 30 degrees and up to 90 percent humidity is accompanied by the fact that the construction is not very gentle on the surface of the panels.

The basic task of the HAW project as part of the Mechatronics course and the Mechatronic Design module, led by lecturer Dr.-Ing. Anna Kerstin Usbeck, was to develop a solar cleaning robot that would reduce the loss of efficiency by up to 40%.

In PLATO e1ns, the structure, the functions of the individual components, the interfaces, the linking of the components to each other, and an FMEA were created. The result, after more than two semesters and additional projects and bachelor theses, is the AntidustA 2.0 (see picture). It consists of three main components: the guide carriage, the cleaning carriage and the control cabinet. The guide carriage consists of a drive module, follower module and profile rails, which enable the movement on the Y-axis. The cleaning carriage consists of the cleaning module and the necessary mounting brackets for the sensors. This moves on the X-axis. The signal and information processing as well as the complete power supply take place in the control cabinet. The brush is only operated when moving in the negative Y direction. This allows dust to be removed in one direction. Emergency stop switches are installed on each side for protection. The housing of the control cabinet is protected against dust and splash water.

So far, three prototypes for manual cleaning (without motor and electronics) are in use in Senegal. These are currently being tested under dust conditions at the ESP in Dakar. The mechatronic prototype developed with PLATO e1ns is still at HAW and will soon be tested in a student project with additional modifications. Three students are devoting themselves in a subsequent project above all to the integration of remote monitoring of the AntidustA 2.0.

It remains to be seen to what extent the Senegalese startup Conceptech will actually be able to include the AntidustA 2.0 in its product portfolio in the future and develop it to market maturity. Even though the hard-working students at HAW and ESP have been instrumental in driving this project forward, there is a lack of financial resources, infrastructure and local experts, among other things.

Nevertheless, we are pleased to see PLATO e1ns involved in such meaningful projects. We are looking forward to future cooperation and further projects with HAW.

Are you also interested in the PLATO University Program? Here you can find more information. 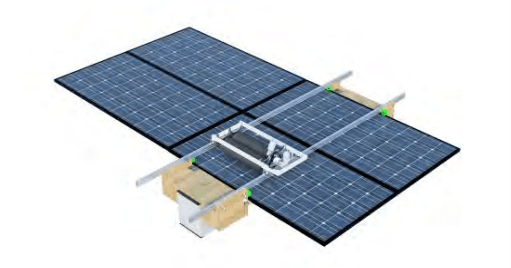 Construction of the AntidustA 2.0 (image source: Archive of HAW Hamburg)