Here you will find answers to many questions on various topics regarding the e1ns Cloud:

About the Trial Version

Working in the e1ns Cloud

Termination of the Contract

If you cannot find the information you are looking for, you can also send an inquiry to PLATO.

Yes, you can try out the e1ns Cloud for 4 weeks (possibly extended) free of charge before purchasing.

You will start with a test and try out your project goals in your authentic environment to get to know the PLATO software at your leisure. During this period PLATO will provide you with a fully functional cloud version. The functions of the PLATO Cloud Trial Version are – depending on the package choice – the same as those you will receive after ordering.

The PLATO Cloud Trial Version can be extended for a maximum of another 4 weeks.
Simply contact us.

Before purchasing an e1ns Cloud subscription, you can start a 4 week free trial to find out if the application is suitable for you.

You can register here for the test offer.

This video informs you about the first steps.

Yes, it's possible. Our PLATO Team will be happy to help you add more people from your organization to e1ns and assign them the desired access rights.

The decision is yours:

The FMEA Free Version is an e1ns Cloud starter package for very small teams (up to 2 users). You can start right up with the creation of your FMEA. The use is unlimited in time.

With the e1ns Cloud Trial Version you have access to the full functionality of PLATO e1ns, limited to 4 weeks.

You can work with a maximum of 2 people in the FMEA Free Cloud.

Using the "Invite new user" function, you can invite a second user and immediately work together in the cloud.

Your data will be stored in the FMEA Free Cloud for an unlimited period of time, as long as you work in it. If you are inactive for 6 months, your account with your data will be automatically deleted - we will inform you about this in advance.

The PLATO e1ns Free Cloud supports the current version MSR 2.1.2, the XML-based standardized exchange format with other FMEA software systems. The FMEA and the associated system structures are automatically built in e1ns with the import.

The PLATO e1ns Cloud Packages are equipped with different functionalities for your engineering tasks. You can find more details in this comparison.

Our experienced PLATO Team will be happy to support you in your decision. Please contact us here.

With the purchase of the software licenses you acquire the right to use the e1ns software for an unlimited time. You (together with your IT service provider) are responsible for the operation of e1ns.

Our experienced PLATO team is happy to support you in your decision. Get in contact with us.

There is a distinction between standard users and co-workers.

Standard users can use the entire range of functions of the selected package. It is possible to reduce the user rights for different users if required.

Co-workers take on the function of a reader-only and task editor. They have no editing rights for methods and documents.

In the FMEA Free Cloud, the number of users is limited to 2.

A maximum of 30 users (standard users and co-workers) can be licensed per system, of which up to 5 users can work in the system concurrently.

In the FMEA Free Cloud, the number of users is limited to 2.

If you need more than 30 users or want to switch from the FMEA Free Cloud to a higher package, please contact us.

The users must be registered by name. If a user should no longer have access to the system, it can be set to "inactive" or deleted. This releases a license and allows it to be reassigned.

The scope of functions can be restricted for one or more users via roles if required and is therefore person-bound. According to the selected package, the roles for a user can be adjusted at any time.

Yes, the switch is possible. For this, the data must be migrated to the cloud, for which PLATO charges a service flat rate. Usually no migration project is necessary.
A contract for the PLATO e1ns Cloud has to be signed. A crediting of a currently running classic service contract is possible.

Before purchasing an e1ns Cloud subscription, you can start a 4 week free trial to find out if the application is right for you.

You can register here for the test offer.

This video informs you about the first steps.

If you have chosen the FMEA Free Cloud, you can register here and log in directly with your login data.

The minimum term is one year. The term is automatically extended by a further year if not cancelled 3 months before expiry.

There is no minimum term for the FMEA Free Cloud.

The service of the e1ns Cloud subscription includes all IT tasks, such as backup, anti-virus protection, software maintenance, scaling of the system according to requirements.

The PLATO Support is at your disposal should problems occur.

Yes, the switch is possible. For this, the data must be migrated to the cloud, for which PLATO charges a service flat rate. Usually no migration project is necessary.

Every user can change his password at any time in the user settings:
User Preferences > Settings > Password > Change

When logging in, click on "Forgot password" and enter your e-mail address. The execution of this action will be registered in the system.

You can exceed licenses at short notice. You can get a license overview in the user administration. If there are too few licenses, they are displayed in red. Every time a user logs in, the license overrun is made visible. PLATO will be informed when licenses are exceeded.

In the FMEA Free Cloud, it is not possible to exceed the specified number of users.

The PLATO e1ns Cloud User Guide can be found directly in e1ns, top right in the toolbar under the menu item "Help".

The e1ns Cloud User Guide is automatically updated with each new version. 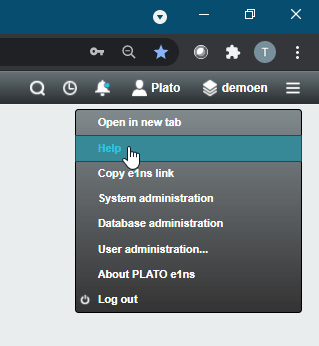 You will get access to the PLATO e1ns Cloud E-Learning videos if you participate in the E-Learning program.

The E-Learning program will be available in September 2020.

Contact your system administrator. He has the possibility to forward support requests to PLATO.

The limit for uploading files is 30 MB per file. The total volume for storing files is 20 GB. An extension of this volume is possible for a fee.

The e1ns Cloud enables the import and export of projects, forms and system elements in various formats. For example, forms can be easily exported to Excel for further processing or output as a PDF export.

The import/export of user lists is also easily possible in CSV format.

PLATO uses Microsoft Azure™, one of the most secure cloud platforms on the market. The security architecture of the PLATO e1ns Cloud uses the latest standards and technologies.

PLATO has no access to the contents of your system.

Your data is stored exclusively on servers of Microsoft Azure™ and is regularly backed up.

HTTPS-protected communication between clients and the servers is ensured by using the current TLS 1.2/1.3 standard. Data is transparently encrypted and decrypted in the cloud using AES-256 encryption, one of the strongest block ciphers available.

Regular backups are performed to secure your data.

If you wish to cancel your e1ns Cloud subscription, please e-mail us. You will receive a form that you have to fill out, sign and return to PLATO.

The notice period is 3 months to the end of the contract.

If you use the FMEA Free Cloud, there is no notice period.

The data will be completely deleted 90 days after cancellation.

A separate agreement can be made to secure the data beyond the termination, for which PLATO will charge a fee.